Homemade Origami Fortune Tellers with a Pride and Prejudice Twist 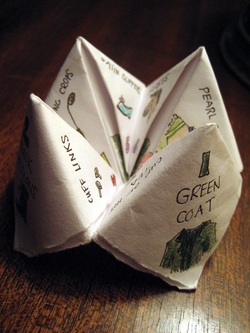 copyright © Susan Adriani, 2011
These funny little sculptures of artfully folded paper are fondly referred to as Cootie Catchers, and are a form of origami used in children’s fortune-telling games. A player asks a question, and the Fortune-Teller Operator manipulates the Cootie Catcher’s shape. (Basically, there are numbers written on each side of the Cootie Catcher, inside and out, and the operator manipulates the paper sculpture according to a specific number the player selects). Questions and answers can also be written on the little fortune-teller, as well as colors, patterns, and pictures.

The earliest mention of a game similar to Cootie Catchers originated in Japan in the early 17th century, and was shortly seen thereafter in Europe. No one, however, seems to know whether it was the result of a European learning the game in Asia, and then bringing it back to his or her homeland, or if the game actually developed in Europe on its own. By the early 20th century, though, the Cootie Catcher game was firmly established and well known among children throughout Asia, Europe, and North America.

I suppose you could say the Cootie Catcher is a little like a crystal ball—okay, maybe that’s a bit of a stretch—but it is certainly a fun way for children of all ages to try their hand at amateur fortune-telling. My friends and I spent many a recess period making and decorating our meticulously crafted Cootie Catchers with various numbers, words, and drawings.

Though there is currently no known record of the game ever having made an appearance in Regency England, I can’t help but wonder what Lydia and Kitty Bennet would have written on their Cootie Catchers if it had? Or Mr. Darcy, for that matter? Whatever it was, I’m sure Lady Catherine would have been seriously displeased!

If you'd like to try your hand at making and decorating your own Cootie Catchers, here's a link with instructions, as well as some beautiful examples. I hope you've enjoyed the P&P theme I drew on my own - I had a lot of fun with it, and so did my seven-year-old daughter (even though she managed to get stuck with Mr. Collins the first time around, and Mr. Wickham the second)! 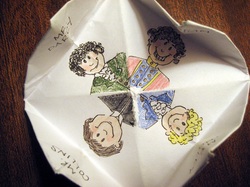